The Legend Of Asia 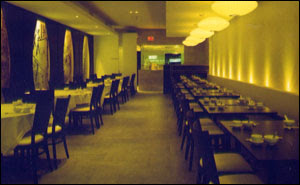 
Okay, so being a little disappointed that a PHO place closes at 930 (go figure), we were re-routed to Asian Legend. I was not disappointed.

We've been meaning to hit up this place PHO VIET with our one and only token Viet- Keen, for months now. We finally got around to going there and the placed closed merely minutes before we got there. No worries, we were still hungry. Keen doesn't let us down. (I know it's spelt Kien but you're a Keener).


Asian Legend has a lot of history behind it, hence the name, I guess. While blogging I decided to check out their website, and got some serious tidbits of info that I'd thought I'd share with all 2 of my loyal readers:

In 1988 the first Asian Legend opened its doors on Dundas Street in the heart of Toronto's Chinatown. In spite of its modest dimensions, the restaurant stood out in the crowd of other Chinese eateries because of its uniquely Northern flavored cuisine, as well as the innovative management style of its owners. From the outset, Asian Legend specialized in traditional Northern dim sum and stir fry, and committed itself to providing delicious food at a reasonable price. With 19 years of experience and a devotion to quality and the highest standards, the restaurant has garnered much praise and acquired a loyal and diverse clientele from all over Southern Ontario.

So Asian Legend has actually been around for awhile now, and I'm not surprised its' expanded to many locations. Their food is damn good, not to mention the principles they stand for as outlined in their website's intro:

"Today's diner is not only knowledgeable about fine dining, but also cares greatly about nutrition and healthy living. To meet this demand, Asian Legend's chefs strive to produce tantalizing yet healthy dishes by utilizing natural flavors and minimizing oil, salt and MSG in all our cooking. Furthermore, by selecting cutlery that accentuates each dish's color, aroma, flavor and presentation, our offerings not only satisfy, but also familiarize diners with the art of Chinese cuisine. This ensures that customers will enjoy a truly memorable and value-added experience. "

I like what I hear. Now on to the rest of the experience.

A newly decorated place, Asian Legend is a little spot tucked in Metro Square, and you don't even know this place is there from Steeles, you have to actually venture into the back entrance to see the establishments. Amongst a few bubble tea houses, a PHO 66, and a bunch of restaurants, sits ASIAN LEGEND, a quaint but well decor'd eatery.

This place has a lot of crisp, well defined lines, sharp angles and bold colours. Nothing too outlandish or extreme. A very calm, feng-shui-ish feel, with cool and warm colours dispersed evenly throughout

I think we got there as they were closing. I say this because the waitress gave us the "oh man we're closing soon" look as we walked in and sat down.

Luckily for our resident Asian speaking counterpart Winse, we were able to actually get some service. He recommended a few dishes, and got the ball rolling by ordering some staple apps, namely the dumplings.

I have to admit, I like Legend's Menus. They are small, but colourful, with nicely printed menus and pictures that are numbered to match their description. They even have the descriptions in English and Chinese (I think?). Little mini red peppers indicate "spicy", and not so much spicy. That helps us find the ones to order. Not to mention the leather covers give them a little extra nice.

I also like the idea of the large round-a-bout in the middle of the table. This helps for easy access within the shared meals, which are all the rage these days, and should be.

So we ordered an array of different dishes, including:

To start, we obviously went for the Hot and Sour. As I always say, no one can beat Spadina Gardens' Hot and Sour. But Asian Legend gave them a damn good run for their money. I was pleasantly impressed. Their soup wasn't very thick, which was it's only downfall, but hey maybe that's just the way I like it. It was amply full of vegetables and it's spiciness was just perfect. Great start.

Everything we ordered was great. I especially enjoyed the Beef-Short Rib Noodle soup. This was excellent. The beef just fell off the bone, like it had been simmering for days. Not to mention the richness of the broth, which was also very light. I know that seems odd that it could be rich and light, but it just was.

Shanghai Noodles were very good also. Everything was sauced to perfection, not too excessive and very well balanced. One thing I noticed about the dishes were that none of them were heavily oily, as Asian food usually tends to be. This helps as the food doesn't stick to your gut at the end of the meal, that causes mass problems due to Itis and forced tutlets.

The General Tao Chicken was nice and spicy, sauced evenly and had a good variety of flavours incorporated with it. The eggplant was moist and flavourful, but still we were able to taste the eggplant itself, not just what it was sauced with.

So food-wise, everything was great.

The only thing that could have improved a bit was the service. Before we even got our soup to start, they server came and gave us our bill. We thought she just wanted to clear her till and give it to us, until she came back and asked us to pay it right away??? Before we even put our napkins on our lap we had to pay. This was odd. Okay, I know you want to close soon but seriously. Oh well maybe that's just standard in Asian restaurants. I dunno. Its not McDonald's I thought.

Other than that I would put this restaurant up at the top of my Asian List. They did well in all aspects and definitely deserve a second visit.

COTL their website for a full menu, and it is quite extensive. You can even sign up for a VIP pass! Killer.

Posted by Culinarian at 6:54 PM