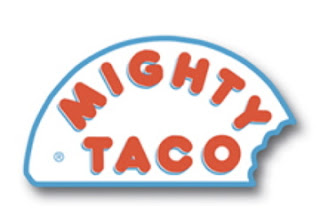 Okay this will be short and sweet. Actually not really sweet at all, but maybe sour?

On a recent trip with a fellow foodie, let's call him Squince, just to keep him anonymous- we ventured across the border to our favourite shopping spot, Buffalo. Determined to find as many deals as possible, namely to buy iPhones at the time, we found ourselves hungry after a 2.5 hour drive which we spent conversing about food, and more particularly, our similar dreams of opening a burger joint. This hopefully will be a reality someday, but I'll save that for another post.

So why is this post about Mighty Taco, you ask? Well when two foodies who obviously share a passion for food- and love to hunt for great food at any length- end up in the armpit of America, they tend to really get a 'feel for what the people eat' in the place they're at. Personally, I wanted to go to The Cheesecake Factory, however time was an issue and we didn't want to waste any time dining when we could have been shopping. So companion Squince blurts out as he is known to do on occasion "I Want Mighty Taco!". And that's how we ended up there.

Mighty Taco is just as ghetto as it sounds. Easily compared to Taco Bell of the North, it stands alone in a small square building, and is as straight forward as it can get inside. You walk in, there's an order/pickup counter, and tables and booths to each side. That's it. Nothing more, nothing less. The decor exudes fast-food 'joint', and that isn't saying much.

With 3 Berthas working behind the counter, I've never been so hesitant in my life to place an order. Not sure if it was the girth of the person, or her scratching in between punching in the order, but something just sent a shiver up my spine.

There were some interesting things on the menu, but I wasn't in the mood for a heart attack. Peep some of these heart-stoppers that ever Jimbo, Billy-Bob and Betty were scarfing down:

I went with the hard and soft taco combo, trying to play it as safe as possible. I had to add $0.50 for sour cream- which is pretty lame. And it didn't make the tacos any better.

I did like, however, getting the nachos on the side with the combo. Salsa and Cheese dip were extra, but still was a nice touch to pretty heavy combo.

Tacos were standard, nothing really to write home about. Everything I had expected- soggy, meaty (not sure what kind of meat it was), and cheesy. It still satisfied my craving, so I can't really complain. However I prefer my Taco Bell. At least I know their meat is Graded C- F, as opposed to Mighty's, which I have no idea what their grading is, if any at all.

Anyways, all in all, Mighty Taco led to a Mighty Tut merely minutes after we left. Not good when home base is 3 hours north.

So next time you're in New York State, and have the hankering for a heart attack, visit good ol' Mighty Taco, and I guarantee you'll be satisfied.

All my faith has been lost for my friend Squince...Redemption is necessary.
Posted by Culinarian at 3:14 PM

Bro ever since I read this post I have the God damn "Mighty Taco" commercial song in my head, where that sont keeps repeating "Mighty Taco."

As for Squinsontia, he is ill.

I say we find redemption at a proper Mexican restaurant. There are two in my hood: Chimichangas and Mariachis. Let's do it up.

And you're right, Big Bertha's really scare the bejeezus out of you when you've got to order food.

And the scratching? Oh, the humanity.

Scratching? Wow, I truly do applaud your courage to order after that. I could not exhibit courage of that kind.

oh, it was pretty difficult.

I'm down for some mexican grubbage anytime...I've heard this Chimmi place is great...
Let's do it

This was, by far, one of the funniest reviews I've ever read.

Being from Buffalo - it's sad what some people refer to, and settle for as Mexican food.

By the way, I called it Mystery Meat when I tried a taco several years ago - so finely ground, and fatty - ewwwwwwwwww.