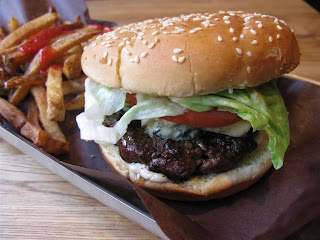 Okay so its been about 7 months since i last blogged which is really sad to say....but this is mainly due to the facts:

c) food trends are really pissing me off lately...like if i see the word "fusion" on a website, or "traditional" on a menu....its a bad scene- thus its been a 'culinary recession', so to speak
So even though there has been a blogging hiatus...this does not mean that i have not been nibbling around t.o. still looking for gems. It was only a matter of time before I dined somewhere that just needed to be blogged. That time has come my friends.
Enter CRAFT BURGER
830 Yonge St (just north of Bloor)
http://www.craftburger.com/
After a couple of hours of walking through yorkville with nothing purchased, we found ourselves quite peckish. Of course we stopped off for a few tasters samples at the new 'Cold Stone Creamery' (post to follow), but that wasn't doing it. We weighed our options and our minner budget and opted for something slight. We ended up infront of La Mexicana, which I had never been to but my fellow sont Neil had proclaimed "its not that good", in a Kramerish fashion. As we pondered whether to chance it or not we looked up and saw the sign that read 'Craft Burger'. My eyes lit up. I was still in awe that there was a place not called 'hero burger' but then again its downtown, where all the hidden gems get lots of love but no real exposure. In we went.

I love the concept that CB has adapted; it screams simplicity and authenticity, and paired together with a warehouse style decor and no frills approach, CB is great success! Inside you find about 30 seats, one side with individual couple tables in a long row, and in the front on long community table with wheely chairs. As you walk in there's an ordering station with a small drink fridge. Their menu is a huge blackboard with their few but perfected homemade burgers chalked up for display. There's a nice vibe inside CB also, with black painted walls and brick and concrete surroundings, this a small place but it seems bigger than it is. Jazz music plays in the background to set the mood. CB feels as though you are in the distillery district or the like. I like. The menu includes very few items- their original homemade 7oz burger topped in a few ways, like the cheeseburger or the 'spicy', which came with carmelized onions, and their spicy mayo. They also have the 'alternative' which is vegetarian, a lamb burger and a chicken burger, which is a huge breast on a bun. They also serve fries and onion rings, both handcut to perfection. That's basically it for the menu aside from some $4 bottle root beer that couldn't be worth it. $7.95 gets you a burger, fries/onion rings and a pop or water. That's a steal considering the freshness of the food compared to a $5.79 quarter pounder combo at good ol McD's (I still got love for you) that one wonders where the meat came from. Now let's talk presentation. So after ordering we decided to eat in so the server gave us a little stand with a numbered card on it to keep on our table so they could find us. This idea is great compared to Burrito Boyzs' shitty number system that doesn't work and is pretty unsanitary. After waiting for about 8 minutes (which is noted on the menu 'our items are all made fresh and take 8-10 minutes', which in the food industry means: if you're in a rush, f*ck off) our burgers arrived. Expecting a red basket with red and white checkered plastic grease covered parchment paper, we were pleasantly surprised to be handed a thin metal platter with a black piece of thick butcher's paper, with our massive burger and fries and rings on the side.
Mmmmmm. We dove in. My burger was perfect, a nice puffy baked roll topped this thicket of a beef patty with just the right amount of sauce oozing out the side. My burger was a beautiful balance of bun and meat, with the proper amount of softened onions to provide a sweet kick. The spicy mayo layered a nice blanket (R.I.P. MJ) over the meat patty which must have been AAA ground beef as there was no filler, no chewy pieces, just beefy goodness. Sont's chicken burger lacked some sauce, but after trying mine he quickly snapped at the waitress to bring us some on the side, and I requested some pickles on the side. They obliged with no concern and we were quite content. The fries were like the fries one would get on a good day from the blue truck infront of Queens' Park, hand cut russets with the right amount of skin on each one, minus the truck's greasiness. The onion rings were amazing. Not those big ones that slither out the onion from the batter after the first bite is taken. The batter hugs the onion on each bite and provides superb crunch. "Best onion rings I've ever had" commented the Sont, which must have merit coming from someone who has been living in england for the last 3 years, he should know his way around some chippys. A convenient stand on the table provided us with the neccessary condiments, including malt and regular vinegars, s + p, and of course ketchup. In a proper squeezy bottle. Not like those bushy Heinz bottles that look fancy but are a bitch to wait for.

So I think its safe to say we thoroughly enjoyed our burgers and sides. Craft Burger embraced my #1 food philosophy that I wish more places would consider: do one thing well and do it right. Multi-tasking has not place in the food world. The fact that CB spends all its time and money into making exceptional burgers gives me the faith and trust that they know what they're doing. How easy would it have been for CB to throw on some more pretentious sides onto their menu to reach out to the 5% who want to 'skip the bun'? Very easy but CB simply says 'no no' to those who don't want a burger. So no salads, no wraps, no low fat mayo, no b.s. Just how it should be. Instead of accommodating the rare person CB just stuck with what they do best, and basically tell people that if you try to order a salad: "Nuthing is coming. Nuthing!"

For my overall rating I think Craft Burger exceeded all my preconceived notions of 'another burger joint' by adding a little 'BAM' to a rather conventional concept. It can almost be considered upscale to a degree without the snooty people and prices. Their no frills approach to burger making involves few but intense, bold flavours that accentuate rather than hinder the burger itself. Its so easy in today's restaurant world to throw in a splash of truffle oil or use the word 'kobe beef' out of context, to the point where the paying customer is consumed by these words and falls for this trickery. And CB could have done that too, and charged an extra $4-5 and sadly we would fall for it. But I guess since it is located on the outskirts of yorkville and not directly on Cumberland St., CB stayed true to itself and to its customers and gave us the real deal. There's something to be said about a place that doesn't overcharge- it shows dedication to their customers who will come back more often than not. It also shows they are there for the love of food rather than trying to make a quick buck on us innocent carnivores.

5 stars for Craft Burger for an authentic, traditional, and delicious burger. Y'all come back reaaaaaaaaaal soon.

very crafty... definitely have to check it out..

Sir Bunsalot, I'm coming with you.